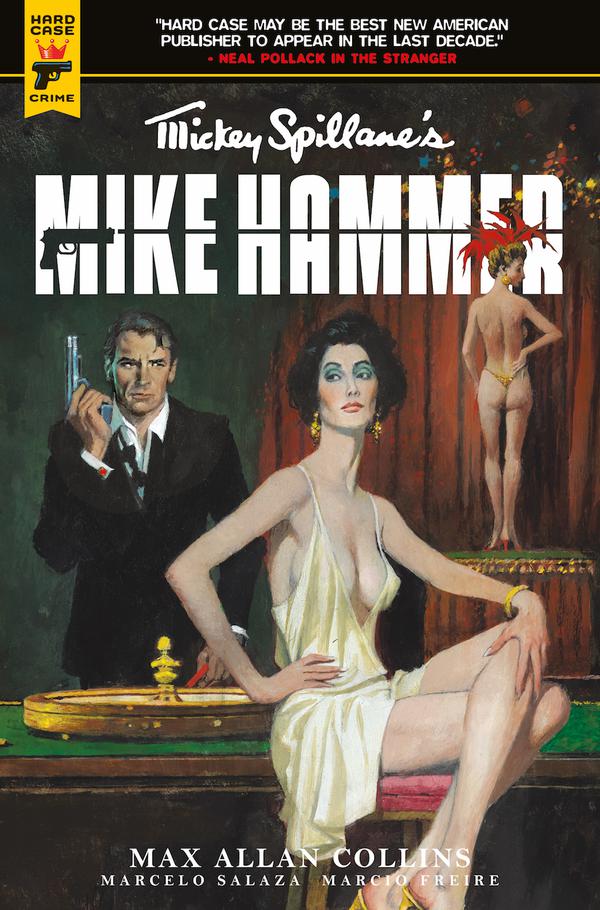 When a chance encounter with a captivating femme fatale leads to a violent mob retaliation, hard-boiled detective Mike Hammer finds himself dodging both bullets and hard broads as he undertakes the most dangerous case of his career.

‘The Night I Died’ is part of a series of new Mike Hammer stories that Titan Books are publishing as graphic novels as an offshoot of their Hard Case Crime imprint. It’s written by Max Allan Collins, who has also written a number of new Mike Hammer novels, with art by Marcelo Salaza and Marcio Freire.

I’ve only read one of Mickey Spillane’s original Hammer novels (the classic ‘I, The Jury’), but reading this modern retread it occured to me that its strengths and weaknesses are one and the same thing. This is a story that is faithful to Spillane’s legacy. That means it’s full of two-fisted action, sex and hard boiled dialogue, all of which makes for a fun read. It’s also unpleasantly misogynistic and uses a threatened sexual assault on one its female characters in an exploitative way. That’s not cool at all and it made for uncomfortable reading. The problem is, would a Mike Hammer story be a Mike Hammer story without these things? And if it wouldn’t (and I suspect that to be the case), then should we be rebooting the character at all?

That concern aside, there is a lot to enjoy here. The story is typical PI fare, with Hammer hired to investigate a murder and ending up embroiled in a twisting plot featuring rival mobsters, a femme fatale, missing millions and more murders. Max Allan Collins does a good job of keeping the story moving along, and while I wasn’t that bothered about getting to the bottom of the mystery, the action is never less than entertaining. The art didn’t work for me as well as the writing did. It’s cartoonish and uninventive and whilst it does the job I didn’t feel that it added anything to the story.

If you can put aside the ingrained sexism it’s a fun read, but I couldn’t help wishing that the creators had done more to reinvent Hammer for a modern audience. Homages like this can be a lot of fun, but when the source material had such great flaws (as well as strengths), it seems like a missed opportunity not to address them.

Note: I received a copy of this for review consideration in my role as a reviewer for scifiandscary.com – given that it’s subject matter doesn’t fit with the scope of that site (SF and Horror), I am reviewing in on CriminOlly instead.

One thought on “Mike Hammer – The Night I Died by Max Allan Collins, Marcelo Salaza and Marcio Freire #BookReview”