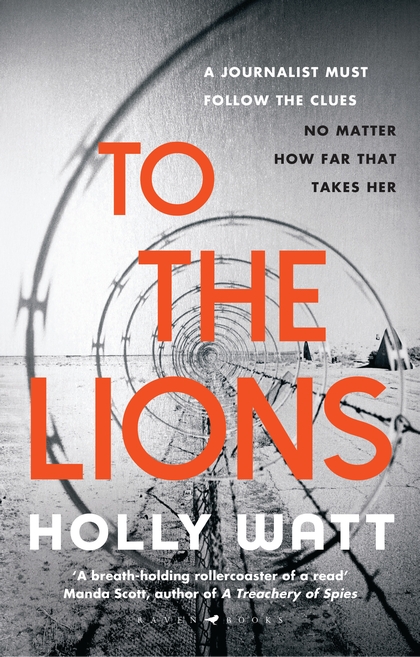 A journalist must follow the clues, no matter how far that takes her.

Casey Benedict, star reporter at the Post, has infiltrated the lives and exposed the lies of countless politicians and power players. Using her network of contacts, Casey is always on the search for the next big story, no matter how much danger this might place her in, no matter what cost emotionally.

Tipped off by an overheard conversation at an exclusive London nightclub, she begins to investigate the apparent suicide of a wealthy young British man, whose death has left his fiancée and family devastated.

Casey’s determined hunt for the truth will take her from the glitz of St-Tropez to the deserts of Libya and on to the very darkest corners of the human mind.

‘To The Lions’ is everything a thriller should be. It’s a gripping, convincing thriller and mixes a dynamite plot with believable detail. Holly Watt has delivered an extremely impressive first novel that I struggled to put down.

The plot is simple, but powerful and effective. Journalist Casey, who works for fictitious London paper The Post, overhears a conversation in a bar that suggests that rich businessmen are committing murder for kicks. The book follows her investigation as it crosses continents and, inevitably, puts her own life in danger. It’s a brilliantly paced book and heart-stoppingly exciting at times,  whilst never using cheap gimmicks to achieve its thrills. The prose is distinctive and punchy, with a sometimes aggressive rhythm that suits the subject matter perfectly.

What impressed me most, though, was the human angle. This extends both to the cast of believable characters and to the excruciating dilemmas Casey has to face as she tries to uncover and document the truth. She’s an easy character to identify with, facing the classic modern quandary of having to balance her career with her private life. Her determination puts her in horrific situations, but I never found myself doubting her motivations. Whilst the villains of the piece are far from sympathetic, they are similarly convincing. So too are the rich cast of lesser characters, Casey’s colleagues at the post and the innocents whose lives are touched by her investigation.

That investigation is itself fascinating. Watt is a journalist by trade and it shows. The book is packed with fascinating detail on the tricks of the trade. Much of it is incidental to the plot, but I found every titbit a delight.

At its heart this is a book about the nature of human evil in the modern world. Watt spends time covering the vast gulf between rich and poor, but the book never feels preachy. Instead it’s powerful and effective and made me think more than a thriller has for a while. Make no mistakes though, this is a thriller. It’s a page turning tour de force told with passion and conviction and one of the most impressive debuts I’ve read for a while.