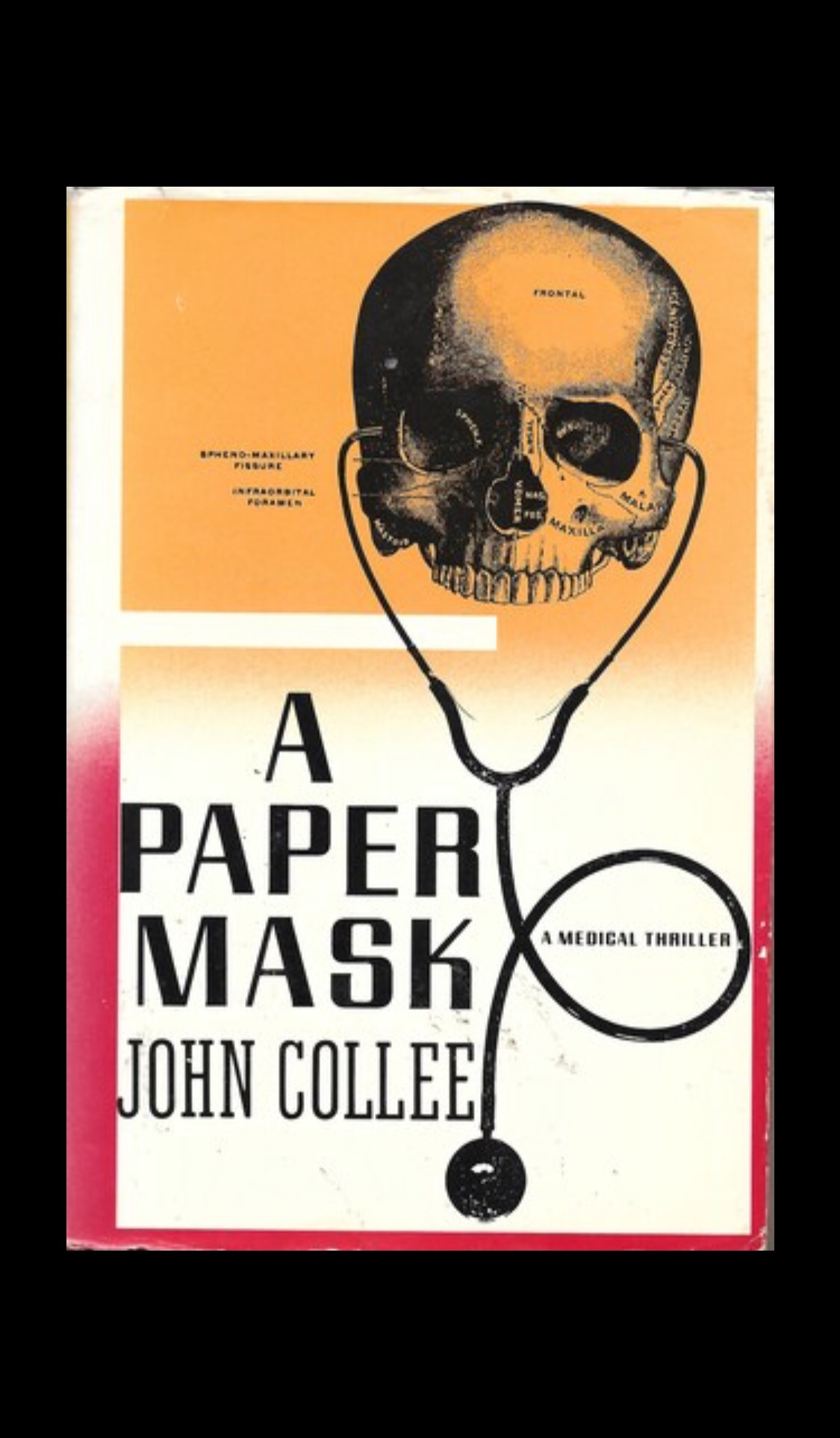 A nail biting thriller in the tradition of “Ripley’s Game”.

Hospital orderly Matthew Harris is every bit as smart as the junior doctors he works alongside. He’s also trapped, bored, ambitious and ruthless.

When a medical intern dies, Matthew assumes his identity and takes the dead man’s next job, on the far side of the country, as a junior Emergency Room physician.

As the deception starts to unravel, the young nurse who falls for him is the one person standing between the newly-minted bogus doctor and the exposure of his lethal charade.

I was familiar with ‘A Paper Mask’ through the excellent 1990 film adaptation of it with Paul McGann and Amanda Donohue (and no ‘A’, it’s just called ‘Paper Mask’). When someone recently asked me to recommend a medical thriller I remembered that the film was based on a book and suggested this. Once that thought was in my head, of course, I had to buy myself a copy too. Incidentally, author John Collee also wrote the screenplay for the film. In fact it’s as a screenwriter that he is more widely known, having also penned ‘Master and Commander’ and ‘Happy Feet’.

The story of ‘A Paper Mask’ is straightforward and effective. A hospital orderly, Matthew, who has picked up a passable knowledge of medicine through his job, masquerades as a doctor. It’s a great concept, so great in fact that it was comprehensively ripped off in 2017 for a BBC show called ‘Trust Me’. The plot is as you’d imagine it, as the deception continues the risk of discovery increases and Matthew has to take more and more extreme measures to protect his secret.

Whilst the book is short and the story simple, it leaves an impression. In John Collee’s capable hands, the tale as it unravels feels grimly inevitable rather than predictable. It’s written in the first person and Matthew’s narration is compelling and often chilling. Over time it becomes obvious that he is deceiving himself as much as anyone else. There is a disturbing sociopathy to his relation of the events, a lack of empathy that is as convincing as it is troubling.

It’s Matthew that makes the book as effective as it is. If he were a sympathetic hero (as the protagonist in ‘Trust Me’ became) the book wouldn’t be nearly as memorable as it is. Instead his constant self-justification in the face of the unintended consequences of his actions is thought provoking. The book makes us think about our own choices and how they shape us and change our lives and those of the people around us.

So despite the fact that I hadn’t read the book when I recommended it, I’m glad that I did. It’s tense and thoughtful; easy to read but surprisingly deep. In other words, everything a crime novel should be.

2 thoughts on “A Paper Mask by John Collee #BookReview”