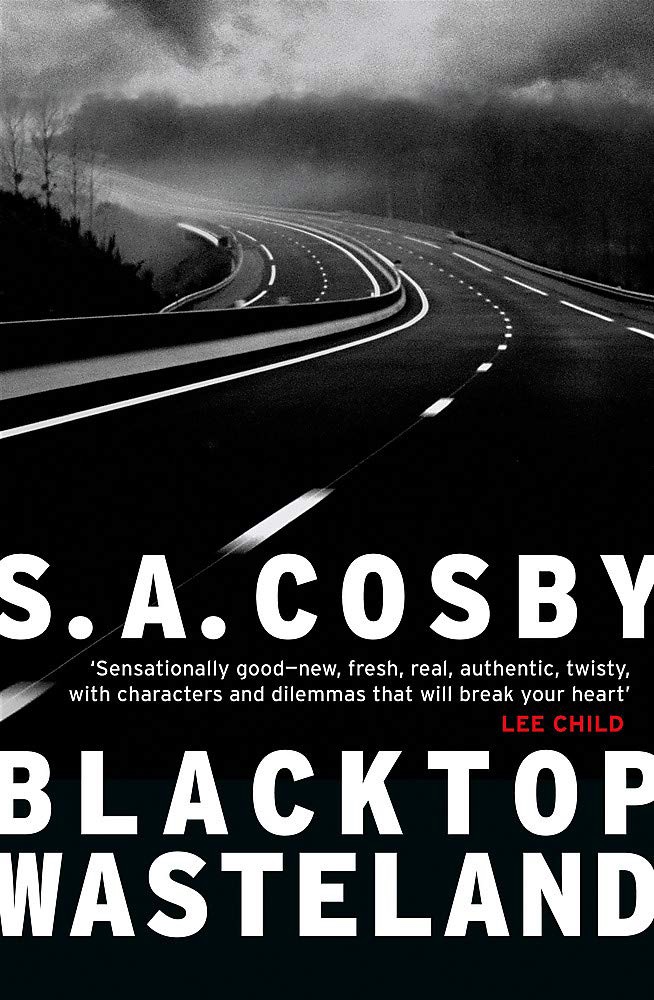 Beauregard “Bug” Montage: honest mechanic, loving husband, devoted parent. He’s no longer the criminal he once was – the sharpest wheelman on the east coast, infamous from the hills of North Carolina to the beaches of Florida.

But when his respectable life begins to crumble, a shady associate comes calling with a clean, one-time job: a diamond heist promising a get-rich payout. Inexorably drawn to the driver’s seat – and haunted by the ghost of his outlaw father – Bug is yanked back into a savage world of bullets and betrayal, which soon endangers all he holds dear… Like Breaking Bad in a high-speed collision with Drive, this stunning debut holds up a cracked mirror to the woozy ideals of the American dream – a dazzling, operatic story of a man pushed to his limits by poverty, race and a scarred, self-destructive masculinity

‘Blacktop Wasteland’ blew me away. It’s gripping, brilliantly cinematic, thoughtful and moving. The plot and themes aren’t desperately original, but it doesn’t matter when the writing is this good. In fact, the modern retread of well-worn noir tropes gives the book a classic vibe that works perfectly. The result is a masterpiece of crime fiction that’s lean, mean and rockets along at 100 miles an hour.

The protagonist is Beauregard (or Bug), a black man in a Southern US state with a criminal past he’s trying to leave behind him and a family he’s desperate to protect. When events conspire against him, he finds himself involved in the robbery of a jewellery store. Naturally, things don’t go to plan and he finds himself fighting to save himself and his family.

Like I said at the start, it’s a familiar story, but SA Cosby tells it so well that it feels brand new. Beauregard is a getaway driver, and I think the driving scenes in this book are the best I’ve ever read. They have the visceral intensity of the best movie car chases, tyres squealing and metal crunching as Bug fights the road and his enemies. Cars are weapons in this book as often as guns are, and they’re used to lethal effect.thought

The pacing of the book is just as good as the action scenes. At 300 pages it’s the perfect length, and the plot unfolds beautifully. If it was a movie it would be 90 minutes and you’d be on the edge of your seat for every one of them.

Cosby weaves in a commentary on racism in America with a skill that makes it thought-provoking without ever overwhelming. Even more impressive is his take on the kind of toxic masculinity that is so common in this kind of thriller. Bug is a man at war with himself, torn between the memory of his outlaw father and his desire to be a good parent to his children. At times Cosby’s writing on the subject veers close to cliché, but he always stays on the right side of the line and the result is effective and thoughtful.

‘Blacktop Wasteland’ really is the full package. The best crime novel I’ve read this year without a shadow of a doubt. Do yourself a favour and pick up a copy today.