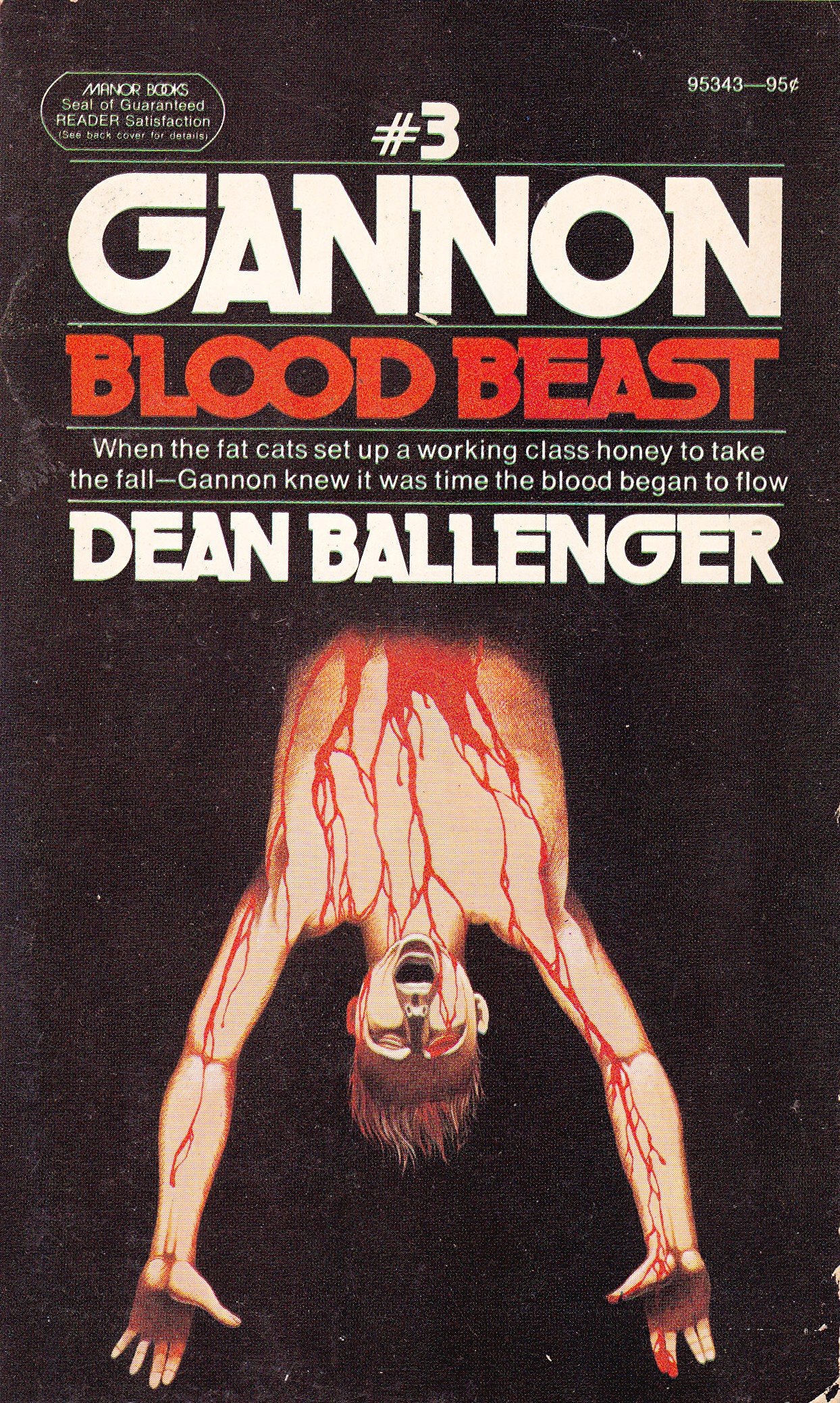 Terror came over Hibbs’ handsome face. He tried to tell the two hoods that he had just been joking about paying the 78 thou, but no words came out of his bollixed larynx. His eyes protruded with fright, but he could see no out in the darkened parking lot.

Veetch grabbed Hibbs’ right ear and pulled it out from his head. Suddenly he sliced it off.

“I’m giving it back,” Juice said, taking the ear from Veetch and holding it between his thumb and forefinger because it was leaking. “Maybe a doc can glue it back on. But next time the parts we slice off won’t be glueable.”

He shoved the ear into a pocket of Hibbs’ expensive jacket. “Next time, pal, it’ll be your ____!”

In many ways ‘Blood Beast’ is an archetypal pulp fiction novel. It’s short, derivative, slightly idiosyncratic and way more entertaining than a lot of more mainstream popular fiction. It’s also brutal, offensive, laugh out loud funny (without meaning to be) and weirdly memorable.

It’s the third book in the ‘Gannon’ series by Dean Ballenger. Obviously I’d rather have started with book one, the brilliantly titled ‘Blood for Breakfast’, but these books are rarer than hen’s teeth and beggars can’t be choosers. The books detail the adventures of Mike Gannon, a modern day Robin Hood. That’s the publisher’s description, not mine, I’d call him a low rent Mike Hammer with less charm and more gore than the original.

In ‘Blood Beast’, Gannon is helping a young woman whose been framed for embezzlement by a wealthy businessman. The businessman isn’t the biggest problem though, that’s the ruthless gangsters his son has built up huge gambling debts with (leading him to commit the aforementioned embezzlement). The book opens with a phenomenal scene where a bunch of hoods attack Gannon and the woman he’s in the middle of screwing and is then mostly told in flashback leading up to that point.

The plot is pretty much irrelevant though, merely an excuse to string together scenes of two-fisted action, torture and sex. All of this told with frequently bizarre cod-hardboiled prose. Lines like “Hibbs’ unease came out like his pipes needed a lube job” are common and eyes are routinely referred to as “orbs”. Ballenger also has a habit of repeating phrases in dialogue, a technique that is amusing at times but quite effective.

“Sorry to bother you, Mr Donato,” Juice said, “but I have some news which is not good news.”

“It’s on account of a loan I made which caused a bunch of things to happen I had no idea would happen.”

It’s in the scenes of violence that Ballenger really lets himself go though, and these are no doubt what drew the reader to the book in the first place. This is not a world where bullets leave neat little holes, they’re more likely to result in dismemberment.

Since Costigan was holding the Wembley, his hand got included, the .357’s dum-dum ricocheting through his hand, exiting with pieces of bone and muscles, then slamming into his elbow, exiting from it in a shower of what had been the bones in Costigan’s elbow joint.

Perhaps not a book for everyone then, but if you like your crime fiction cheap and nasty and you can stomach the inevitable misogyny and racism of 70s pulp, then this might be one you want to check out.