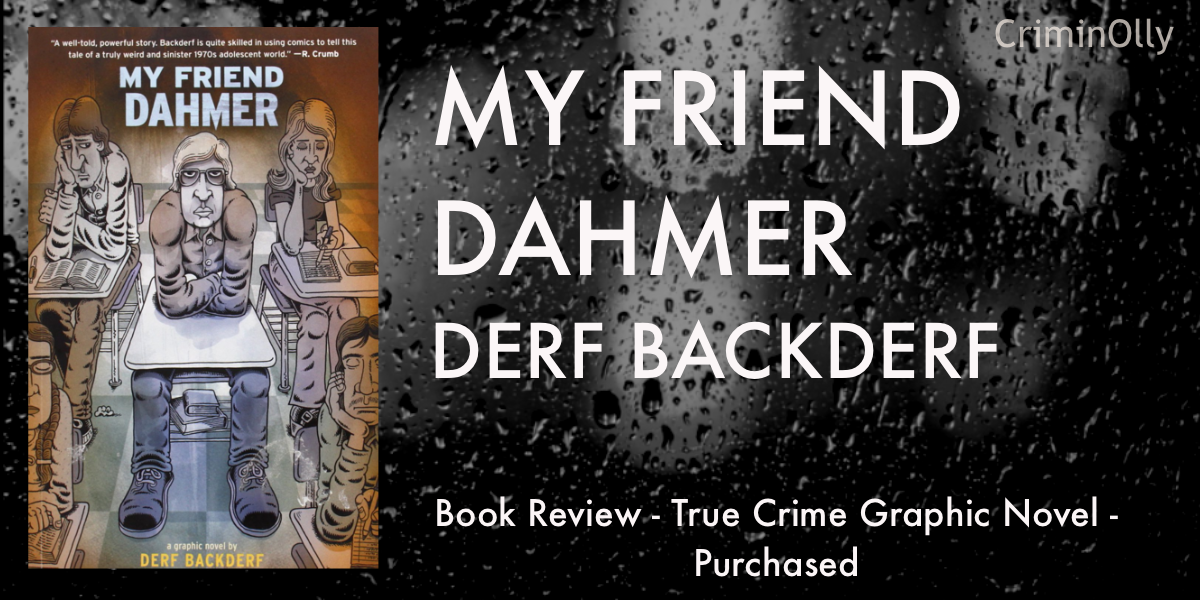 CriminOlly thinks: A truly unique graphic novel that blends true crime and coming of age memoir and is told with admirable honesty 5/5

‘My Friend Dahmer’ is a completely unique work of art. Author Derf Backderf is a noted cartoonist, and also a high school classmate of Jeffrey Dahmer, who went on to kill, and in some cases cannibalise, 17 male victims. It’s hard reading at times, but also moving and thoughtful. The distinctive art style is extremely effective – I thought at first that it might be too cartoonish, but it quickly drew me in and I found myself completely immersed in the story. Unlike most true crime works, ‘My Friend Dahmer’ focuses very much on the killer as an individual, rather than on his crimes. In fact only Dahmer’s first murder is covered at all, and that comes right at the end of the book.

Instead, the book paints a fairly sympathetic picture of the life of teenagers in small town Ohio in the 1970s. Their existence is one familiar from a million American TV shows and movies, with the one exception being our knowledge of what Dahmer would become. In the book he is an oddball character, clearly disturbed but prone to acting out in ways his peers find hilarious. It is this that leads Backderf and his friends to hang out with him, forming the ‘Jeffrey Dahmer Fan Club’.

Backderf has had a few goes at telling this story, it first appeared as a one off short in an anthology, and this far lengthier volume has obviously had time to mature. It’s an assured piece, both in the pace of its storytelling and the maturity of its outlook. Backderf has used various sources (laid out in a sizeable appendix) to fact check his recollections and confirm the timeline of events. Most impressive though is the honesty with which he describes both Dahmer and the treatment he received at school – from bullies, from the Dahmer Fan Club and from the largely oblivious or downright neglectful adults around him.

The end result is far more melancholy than I’d expected. Backderf clearly has a lot of sympathy for young Dahmer, even if he rightly and unequivocally denounces the monster he became. It’s an extremely balanced and memorable work and thoroughly recommended, even if you think you don’t like comics.

You only think you know this story. In 1991, Jeffrey Dahmer — the most notorious serial killer since Jack the Ripper — seared himself into the American consciousness. To the public, Dahmer was a monster who committed unthinkable atrocities. To Derf Backderf, “Jeff” was a much more complex figure: a high school friend with whom he had shared classrooms, hallways, and car rides.

In My Friend Dahmer, a haunting and original graphic novel, writer-artist Backderf creates a surprisingly sympathetic portrait of a disturbed young man struggling against the morbid urges emanating from the deep recesses of his psyche — a shy kid, a teenage alcoholic, and a goofball who never quite fit in with his classmates. With profound insight, what emerges is a Jeffrey Dahmer that few ever really knew, and one readers will never forget.